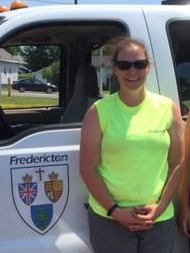 Since it's July, we thought it would be a great time to highlight the Landscape Horticulturist skilled trade that makes our sceneries and communities so beautiful at this time of year!
Feleena Byno is a red seal journeyperson landscape horticulturist and has been in her skilled trade for over 15 years. She currently works for the City of Fredericton. When Feleena finished high school, she wasn't sure what to pursue so she took a year to reflect. During that time, a chance encounter with a friend who was studying landscaping at NBCC, it dawned on her, that's what she wanted to do! She enrolled in the program at NBCC Woodstock in 2003 and was lucky to find 3 other female students, the most women graduating from the program had ever had at that point! Feleena has had great work experiences prior to obtaining her red seal in 2012, including working at Kingsbrae Garden in St-Andrews and Evergreen Garden & Landscaping in Saint John and Moncton, where she became foreperson. Wanting to start a family and be back home, she took a job with the City of Fredericton as a casual, which quickly turned into a full-time position. She loves her job and they have invested in her education and her career progression, sending her for CHT, ICPI and wall certifications. What she loves the most about her skilled trade is "that you are able to see exactly what you've accomplished and it's out there for everyone else to see too". If she were to offer some advice to a girl thinking of pursuing a non-traditional skilled trade, be it landscaping or any other, she would say "to absolutely go for it! It will have its ups and downs but its all worth it in the end. " When she isn't working, Feleena is a proud and  busy mother of three young kids, who enjoys outdoor activities together.